The joys and trials of a German-Kiwi exchange 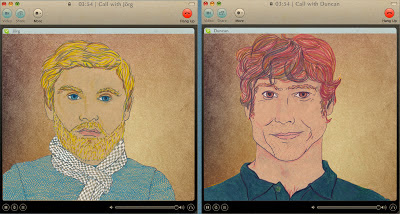 "Lifeswap" is a series of short animations that illustrate the adventures and misadventures of two young men, Jörg, 27, from Münster, Germany and Duncan, 27, from Wellington, New Zealand. Sensing the onslaught of their respective quarter life crises, they have found each other’s profiles on www.lifeswap.net, spontaneously bought plane tickets and are now signed up to live each other’s lives for one year. We witness their delights, frustrations and misunderstandings as they discover the idiosyncrasies of life in the other’s culture through the lens of their own.


The framing device for every episode is a monthly Skype conversation between Duncan and Jörg featuring flashbacks to memorable moments since they last spoke, like the day Duncan was told by Jörg’s flatmate that he must sit to pee and the shock Jörg received when he learnt that he should call his bank manager “Dave”.


"Lifeswap" is a meeting point for Kiwis, Germans and their friends - for anyone who has ever said quietly to him or herself: "That is so German" or "Typisch neuseeländisch!" It is the celebration of a cultural exchange we could fondly refer to as “the dance between the jandal and the Birkenstock."