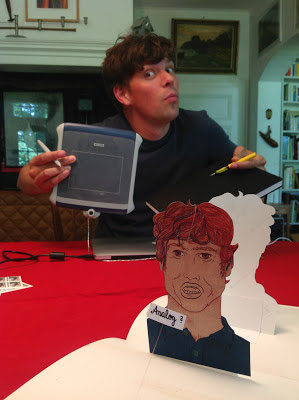 This is actually what Steffen looks like when he's weighing up two options. He will also often construct very detailed paper pop-up figures to help him in the decision making process. This man does nothing by halves.

William managed to capture the moment with a photo.

The question: should Steffen draw "Lifeswap" digitally, with a graphic tablet and its magic pen or revert to the old-fashioned method of fountain pen and paper?

The decision: digital. The graphic pen and tablet produces an image on the screen that looks just like the hand drawn pictures your grandmother used to make.

And the queues of volunteers to help scan 1,500 bits of paper just aren't as long as we'd hoped.