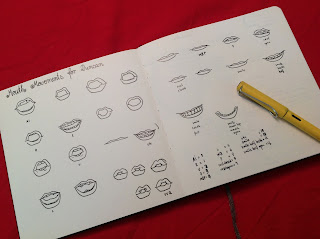 Pretty early on in the project, Steffen decided he wanted to make the Lifeswap videos using cell animation.This is that old fashioned method of animating where every frame is drawn by hand (although now directly into a computer programme) and then the sequence is run together as a moving image.

Steffen has decided on twelve and a half frames per second, which means...well, a hell of a lot of drawing.

Here is a page out of the "Lifeswap" sketchbook which shows Duncan's mouth in the various positions required for him to say all the letters in the alphabet. These will later be used in the animation and synched with the audio. Needless to say, this project is going to require monastic patience.