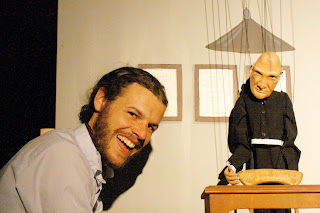 Phill is a great friend, a talented musician and a dedicated sound designer. After working with him on our last project, a marionette play called 'The Kitchen at the End of the World' (hence the picture), it seemed an obvious move to ask him if he would like to do the sound for episode one of 'Lifeswap'.

He agreed! As we sleep, he is sitting at his sound desk in Wellington, creating rustles, scrapes and a little musical intro for Duncan and Jörg's first adventure. Can't wait! Thank you Phill. You're the best.