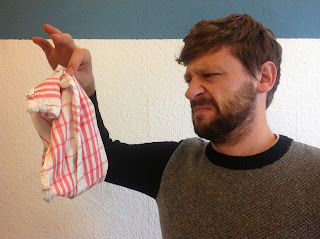 Well, it all started when Steffen's mother, Margot, came to visit us in New Zealand. One afternoon we were enjoying a cross cultural dish-washing session, when all of a sudden, Margot turned to me and said:

"William, the tea towel stinks. You need a new one."

I was taken aback, not only by this wonderful example of German directness - the streamlined, teutonic "subject, verb, object" model of sentence construction - but I was also taken aback by how taken aback I was.

The fact is, life in New Zealand is generally pretty simple and easy; that is, until a problem needs confronting. At which point we Kiwis engage in a weirdly elaborate series of rituals including red-faced silences, eye-averting and all manner of verbal apologies, softeners and excuses. One feels compelled to perform a kind of musical act to avoid explaining what the problem is; it commonly involves a small jerky dance of shrugs, hand-wringing and facial contortions and a sing song of polite words.

So, in episode two of Lifeswap, Duncan teaches Joerg a five step method he has devised of confronting a New Zealander about a problem so as to cause only minimal offense. Watch this space!